If you follow me on Instagram, you already know that I love to travel…even if it means going to Lonavla for a nice Sunday brunch and back. So when I received an invite from JW Marriott Pune for lunch on Saturday, I instantly said yes! Because for me, an ideal weekend is one where I can getaway from the chaos of the city. Since I knew I had something fun to do over the weekend, I couldn’t wait for the week to quickly pass by. Luckily it did. Before I knew it, it was D-day.

I woke up at 8am as our scheduled time of departure from Mumbai was 9am. Since my pick-up point was Worli, I quickly got ready and left. Nikhil, our kind and polite driver had reached Worli Seaface in his white Innova way before time and was patiently waiting for us to come. We (that includes three of us), started for Pune at about 9.15am and were all set to see what the rest of the day had in store for us. Our car had been stocked with cold bottles of aam panna, lassi and several juices for the journey. Thankfully, due to a slight drizzle in the city, it wasn’t very hot or sunny and as we got onto the expressway, it began to rain and started getting a wee bit breezy. Needless to say, our comfortable drive became even more enjoyable.

We reached Pune at about 12pm and were at the property 40 minutes later (thanks to Pune traffic). As we entered, we were warmly greeted by General Manager Vineet Mishra and his kind and loving team. There was something about the place – it felt like home in an instant. I guess that’s why its so popular and buzzing at all times. We looked around for a while and visited its various outlets, starting with the ones on ground level – Pune Baking Co. (the renowned bakery and patisserie), Lobby lounge (which had a special wine promotion for the weekend), Spice Kitchen (their all-day multi cuisine restaurant that was prepping for the on-going Goan festival) and the JW Marriott Food Truck (which unfortunately wasn’t operational that day). Soon after, we proceeded to the next level to see Alto Vino (the Italian restaurant, serving lip-smacking wood-fired pizzas among other things and a variety of wines), Bar 101 (the elite whiskey and cigar bar that houses over 100 different types of whiskey) and Shakahari (their vegetarian restaurant serving authentic Indian specials). Next, we proceeded to Mi-a-mi (the hotel’s rocking night club that was getting ready for Bollywood night) and Paasha (their fine-dining restaurant and bar with an indoor and al-fresco section from where you can enjoy panoramic views of the city). After the property tour, we headed to Shakahari as we had been invited to sample its lip-smacking menu based on authentic Indian cuisines inspired by some of India’s royal, princely states.

A warm welcome with flowers and rose water, an extravagant table set-up and a tikka clad Maharaj Jai Kishen greeted each one of us with his pleasing smile and folded hands. Looking at the hospitality, we knew we were in for a grand feast. The menu, featuring a variety of traditional Rajasthani and North Indian preparations, had been crafted to provide a #RoyalIndianExperience to each one of us.

‘We want to revive the culture of food in its most authentic Indian form. That is the philosophy at Shakahari – a royal dining experience. Keeping this focus, Maharaj Jai Kishen seamlessly blends tradition and flavor for each dish that is specially curated by him,’ said Mr. Vineet Mishra, the friendly and ever-smiling general manager of the hotel.

Bright and shiny silver Thalis with napkins perfectly folded and knotted gave us a true royal feel. As we took our seats, a server came to each one for a handwash. (In India, a traditional Thali is best enjoyed when eaten with the hands, without any cutlery). 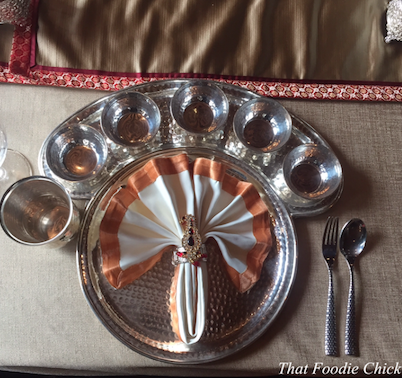 We were all set for our grand feast which began with some Fratelli wine, a variety of starters served with a bowl full of papad, various chutneys and pickles like plum, peanut, mint and mango as accompaniments. The starters consisted of:

Out of all the above, the rajma lasooni salad with fragments of burnt garlic and beetroot tikki were my most favorite.

After a break of about 15 minutes, we were then served our Rajasthani mains. I’m sure you already know that a traditional meal in Rajasthan is incomplete without its speciality dishes like

To be honest, I find Rajasthani food too heavy so I avoid eating too much. But here, it was served with so much love that I just couldn’t say no. I thoroughly enjoyed most of it, especially the gatta curry and ker sanger koftas but I wanted to leave space for the rest. 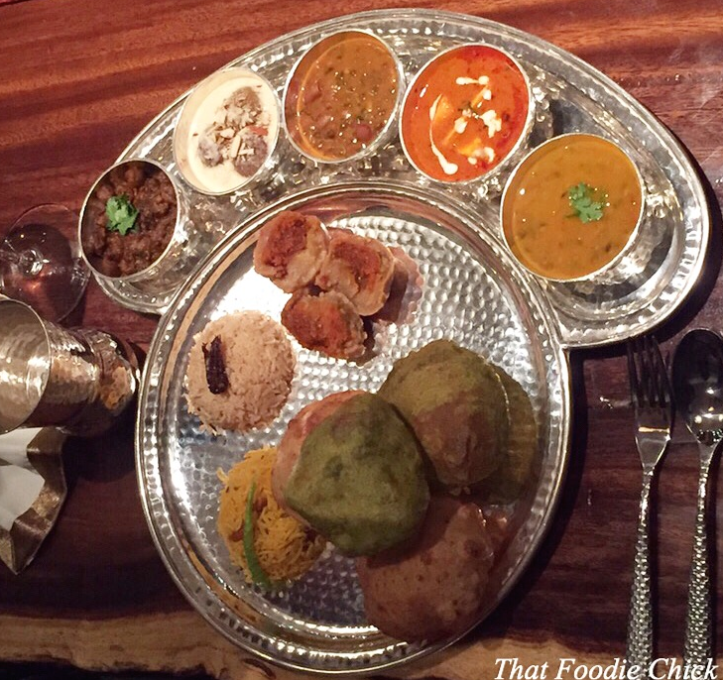 Right after the Rajasthani meal, we were served some speciality North Indian preparations like

The dum paneer kasoori and dal shakahari were amazing. So flavorful and delicious. The pindi choley reminded me of my recent trip to Amritsar. I wanted to go for a second helping but I had to leave some room for dessert. Considering the lavish variety our meal had to offer, I was eagerly waiting to see what the desserts would have in store.

Once everyone was done with their meal, the friendly and hospitable staff of Shakahari, escorted us to the ‘Mishtan Bhandar’ – a room filled with sweet treats. Yes, you read that right. A ROOM full of sweet treats! Everything was so tempting that for a minute I almost forgot I had to take pictures and started helping myself. We could choose from a selection of freshly cut fruits like guava, apple, pineapple, dragon fruit among others or desserts like

I literally wanted to try everything but unfortunately was already pretty full. So I tried a small piece of the ghewar and some mango rabadi – both, absolutely awesome. And finally finished off with some paan.

While chatting with Mr. Mishra, I was intrigued to know how long it took to formulate such a royal meal. ‘About 4 months and 60 tastings later we finalized on the menu,’ he said. Unlike most Thali places where you’re served in a rush, the meal at Shakahari is timed (approximately 60 minutes per sitting) so every guest can absorb the food and enjoy every bit of the experience. The menu keeps changing every now and then so there’s always something new to look forward to.

An hour-long chatting session and a few cups of green tea later, it was time to bid adieu. So we thanked the wonderful team for their impeccable service and hospitality and proceeded towards the car, which once again had been stacked with still, sparkling water and other beverages. Our drive back was just as enjoyable as before as we didn’t get any traffic and were home in less than 3 hours.

All-in-all, it was truly a fun getaway from the city – even though it was just for a few hours. Will most certainly be going back soon again…this time for more than just a meal!

There was an error retrieving images from Instagram. An attempt will be remade in a few minutes.